Over  hundreds of people from the civic domain stepped away from their jobs and universities on Saturday, June 8th, to take  part in a groundbreaking event that happened at Crowne Plaza Hotel in Hamra, Beirut. “@Social media’s pace” sure was the beginning of the uprising campaign that sheds light on the importance social media to foster civic engagement and make positive social change.

The opening of the event was enthusiastic  with  the respectful Ms. Denise O’Tool, and  Mr. Milad Hadchiti who broke the ice by his sense of humor and interactive manner.

The networking game was announced at the opening of the event too, for gathering the biggest number of  business card, its aim was to make connection between people and get to know each other. The other game was about  tweeting about the event on twitter, and the most active ones will be the winners.

The first panel discussion was about the importance of the content that is introduced to the social media, that in turn enhances discussions about the presented content, and advances advocacy campaigns about the underlying issue.  The panelists were: Imad Bazzi, Ali Fakhry, Ahmad Karout, Darine Sabbagh, and the moderator Leila Khauli Hanna

The second panel discussion was about how NGOs can influence the public opinion about a certain idea and spread awareness by increasing the coverage across the media whether it was social or traditional. The panelists were: Riad Kobaissi, Tania Mehanna, Patrick Richa, Omar Sadek, and the moderator Magda Abu-Fadil.

Social Media Roundtables and consultancy booths also took place during the event, concerning the ability to distinguish between the good and bad qualities of media, and how to deliver it to the audience in the most effective ways.

The final part of the event was distributing  prizes for 5 winners who collected the biggest number of business cards,  and  another 5 of whom were the most active on twitter.

All that in an interactive way so that questions and answers sessions  occurred during the whole event, despite the moments of laughter an joy. 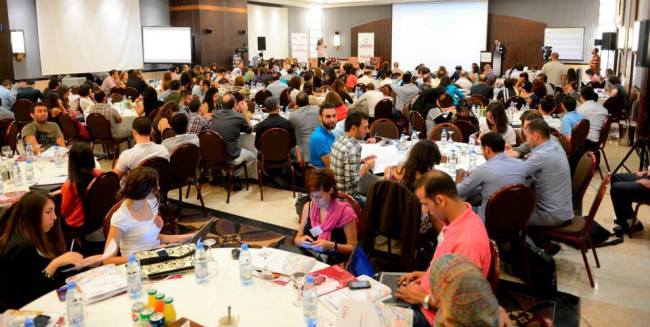